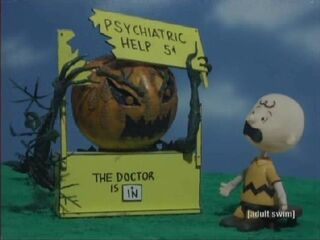 Screenshot of The Time of the Great Pumpkin

You can upload it! Please observe these guidelines.
Season: 1

Segment Summary: Linus finally gets to see the Great Pumpkin, unfortunately, he was not quite what he expected

Linus in the pumpkin patch at night

The Gang in front of Linus' Grave

Meet the Kite-eating tree you ugly son of a bitch!

Animated gif of the Peanuts gang dancing in hell

Peanuts gang dancing in hell after their deaths
Add a photo to this gallery
Retrieved from "https://robotchicken.fandom.com/wiki/The_Time_of_the_Great_Pumpkin?oldid=84810"
Community content is available under CC-BY-SA unless otherwise noted.