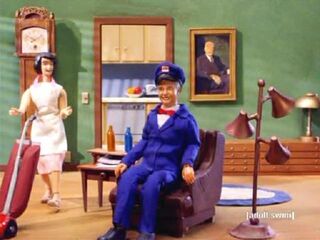 Episode: Ban on the Fun

Segment Summary: If you thought the Maytag repairman was depressed at his day job, wait until you see his home life.

Retrieved from "https://robotchicken.fandom.com/wiki/The_Home_Life_of_the_Maytag_Repairman?oldid=48767"
Community content is available under CC-BY-SA unless otherwise noted.