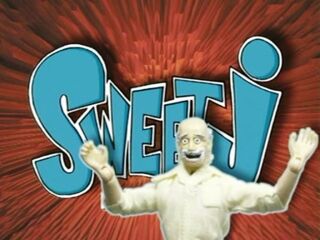 Sweet J Presents is the Internet-only precursor to Robot Chicken. Seth Green had contacted friend and associate Matt Senreich for help creating a stop-motion animation featuring himself and Conan O'Brien, for an appearance on his late-night talk show. A Sony website caught wind of the idea and appoached Seth & Matt about creating a series based on the concept. In 2001, Sweet J Presents was unleashed upon the web.

There were a total of twelve single segment episodes produced, some of which have been reworked for Robot Chicken. Unfortunately, SJP is no longer available for viewing on the web. However, some of the series is a featured extra on the Robot Chicken Season 1 DVD.

Retrieved from "https://robotchicken.fandom.com/wiki/Sweet_J_Presents?oldid=81939"
Community content is available under CC-BY-SA unless otherwise noted.