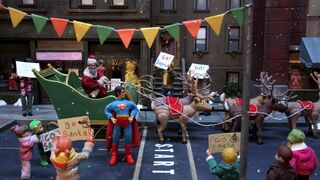 Episode Summary: See what the very first Christmas was like. Kevin McCallister's traps don't quite work out as planned. The creators imagine what Batman and Robin think about their Christmas jingle - hint: don't sing it if you value your life. And the age-old question is finally answered...who's faster: Superman or Santa Claus.