Quick Draw McGraw from the television series with the same name appeared in the skit Laff-A-Munich. While team members Yogi Bear (character), Wally Gator, Huckleberry Hound and Doggie Daddy were killed by the Really Rottens, Quick Draw McGraw escaped from a window only to appear as El Kabong a few minutes later. Unfortnally, he was shot to death before he could stop the villians. He was voiced by Seth Green.

Quick Draw attempting to jump out of the window. 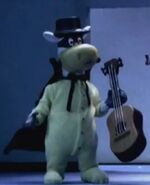 Quick Draw as El Kabong.
Add a photo to this gallery
Retrieved from "https://robotchicken.fandom.com/wiki/Quick_Draw_McGraw?oldid=87735"
Community content is available under CC-BY-SA unless otherwise noted.