Robbers, Homer Simpson (when he got the sailboat painting)

Seth Green
The Nerd (real name Arthur Kensington, Jr., referred to as Gary in "A Date With Scarlett") is the deuteragonist of Robot Chicken. He is a stereotypical nerd who is interested in video games, movies, books, television shows, and women. He also has a lisp when he speaks. Often, he imagines things he likes and says "That would be so cool" and later has a dream about them, with the dream not quite going as he would want. Aside from the Mad Scientist and the show's titular chicken, the Nerd has appeared in more segments that any other character in the series.

In the finale of Season 9, he is tasked with jumping over the Grand Canyon on a motorcycle in order to prevent Robot Chicken from another threat of cancellation. Although he succeeds in jumping the canyon, he crashes into a truck and is killed in a fiery explosion. Despite this, his death was not permanent - as he is revived as a cyborg by the Robot Chicken and the Mad Scientist for the premiere of Season 10 (as well as the season's title sequence and the episode "Endgame"); this is likely due to Robot Chicken's inconsistency in terms of continuity. In fact, the Nerd has also died in his debut appearance.

The Nerd appears to be a young male adult. He has pale skin, brown short hair and two chipped teeth. He commonly wears a yellow shirt with black tie, black pants, black shoes and glasses with black frame. He is 26 years old, according to the sketch "The Great Star Wars Episode VII Jitters Song", a sketch where he gets concerned about the possible outcome of the film Star Wars: The Force Awakens. As of the airing of that sketch, the Nerd is still a virgin, having only lost his virginity in a dream sequence - to a horny grandma. Although unconfirmed (and unseen), he also may have possibly lost his virginity in prison, presumably raped by a homosexual inmate.

We Are a Humble Factory

Cannot Be Erased, So Sorry

Catch Me If You Kangaroo Jack

The Nerd's original appearance used in several sketches, outside his cyborg appearance in Season 10. 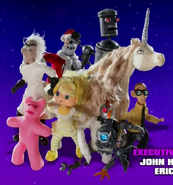