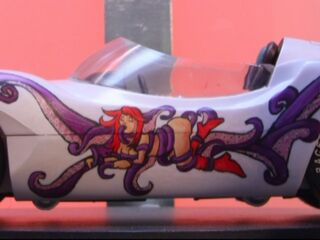 Segment Summary: Speed Racer joining NASCAR is about the equivalency of either Hulk joining the NFL or Giant Man in the NBA, they all don't end well.

Retrieved from "https://robotchicken.fandom.com/wiki/Many_Tentacled_Rapists_From_Hell?oldid=84428"
Community content is available under CC-BY-SA unless otherwise noted.