Judy Jetson is the elder child in the Jetson family. A student at Orbit High School, she is a stereotypical teenage girl whose prime interests include: clothes, hanging out with friends, and revealing secrets to her digital diary. She first appeared in Unsolved Case Files: I, Rosie.

In this skit, George was killed (probably by Rosie) after he fell from the Jetsons' residence and hit the ground. We later see Judy in an alley, where it's clear that she has become depressed after her father's death. As she talks to herself, the door behind her suddenly opens and the Chinese Resturant Guy appears and pulls her into the door. What happened to Judy after that is unknown, but she was most likely killed and served as dinner in the resturant.

She was voiced by Chad Morgan in this segment.

In this segment, her brother Elroy Jetson brings home an alien egg which hatches a Facehugger. The Facehugger later sleeps on Elroy's face causing it to die. The next morning, Elroy is killed when a chestburster emerges from his body. After it escapes into an air vent, Judy aims herself with a flamethrower, getting ready to fight the monster. A few seconds later, the now fully grown monster breaks into the room.  After George is killed and Jane is knocked out, Judy suddenly falls in love with the creature because it's "tall, dark and mysterious". She moves closer to the creature, probably for a kiss, but as she does, the creature impales her through the head with it's second mouth. Rosie later tells the creature to "get away from her [Judy] you bitch!" before shooting the creature to death.

This time, Judy was voiced by Eden Espinosa. 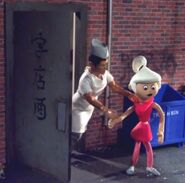 Judy in "Alien Meet the Jetsons".

Judy's death
Add a photo to this gallery
Retrieved from "https://robotchicken.fandom.com/wiki/Judy_Jetson?oldid=79741"
Community content is available under CC-BY-SA unless otherwise noted.