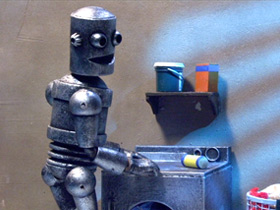 The Humping Robot is one of the many characters from Robot Chicken. He has appeared multiple times throughout each season. He is a tall robot who is fond of humping various objects, usually appliances of some sort. His favorite object to hump seems to be the washing machine, but this robot has been seen humping a jukebox, a flatscreen TV, a spaceship from 2001, a church bell, his own arm, the Epcot center, and a slot machine.

Slaughterhouse on the Prairie

The Godfather of the Bride II

Choked on a Bottle Cap

Retrieved from "https://robotchicken.fandom.com/wiki/Humping_Robot?oldid=87787"
Community content is available under CC-BY-SA unless otherwise noted.