Frieda is a minor character that usually only appears in the Robot Chicken "Peanuts" skits. She is known as the girl with natural red curly hair. She wears a purple dress and purple socks with black and white sneakers.

In this skit, she is seen skating on the frozen pond together with Linus, Lucy, Pigpen, Franklin, 555 95472 and Snoopy. After Snoopy accidentally tosses Linus into a tree, Franklin remarks that the gang is late for the christmas rehearsal. However, Frieda points out that Charlie Brown is in charge, therefore, they can just ignore him and dance repetitively. After this, Frieda skates away with the others, leaving Linus to die in the snow. She isn't seen in the rest of the segment.

Frieda was voiced by Katelin Peterson in this skit, who also voiced Sally in the same segment.

In this segment, Frieda is seen dancing alongside Pigpen, Shermy, Sally, Snoopy and the rest of the Peanuts to gang, to Schroeder's piano music. She didn't speak in this segment. 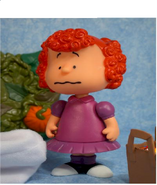 Freida in "The Time of the Great Pumpkin".

Frieda in "Ren McCormack"
Add a photo to this gallery
Retrieved from "https://robotchicken.fandom.com/wiki/Frieda?oldid=86803"
Community content is available under CC-BY-SA unless otherwise noted.