Fred Flintstone is a character who appears in the sketches Cereal Killer, Fred Flintstone's Brake Pads, It's a Living, The Great Gazoo, Flintstone Colonoscopy and Cartoon Smokers.

In this sketch, Fred gets a package from Barney Rubble in order to distract him long enough to steal Fred's fruity pebbles. After a chase, Barney accidentally killed Fred by hitting him hard in the head with a club after Fred starts beat him up. After buring Fred's body in the front yard, Barney goes on a rampage and kills all tools who are witnesses. Later, Barney ends up killed in the gallows. In this sketch, Fred was voiced by Stephen Stanton.

This sketch parodies the fact that the Flintstones uses their feet when stopping their cars. It features Fred injuring is feet badly, and asks himself "Do i go to a hospital, or a mechanic?". This time, Fred was voiced by Dave Coulier.

It's a Living Edit

In this skit, Fred is seen in a hospital, but he has no lines.

In this sketch, Fred is about to eat his favorite food cooked by Wilma Flintstone when suddenly the Great Gazoo (who is an alien) lands on the scene. He gets scared of him, and thinks he is a god, and in the process, undresses Wilma, and kills Dino with the help of Barney Rubble. In the end, he and Barney kills Gazoo by hitting and stomping on him. This time, Stephen Stanton reprised his role as both Fred and Barney from the Cereal Killer segment.

In this sketch, Fred is once again seen at the doctor, where he gets a birdcamera insearted in his ass. When the Bird says he sees "Himself going back to collage" while in Fred's ass, Fred angirly orders the doctor to get "the stork out of his ass".

This time, he was voiced by Seth Green.

In this skit, Fred is among the Cartoon Smokers who ends up in the ICU after getting diagnosed with some kind of lung disease. Thanks to that unspecified sickness, Fred now uses a Robot Voice, and ends up getting ridiculed by Barney who thinks the Robot voice is hillarious. In the end, Barney lights a cigarette next to the pure oxygen Fred is connected to, causing the whole hospital to explode.

This time, Fred was once again voiced by Seth Green, although it's unknown who provided Fred's robotic voice. 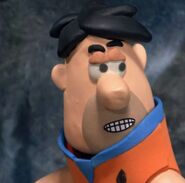 Fred beating up Barney for steeling his Fruity Pebbles

"Do i go to the hospital or a mechanic?"

Fred in "The Great Gazoo" 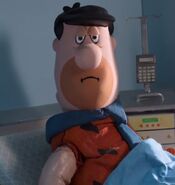 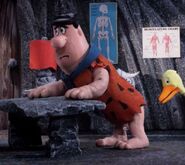 Add a photo to this gallery
Retrieved from "https://robotchicken.fandom.com/wiki/Fred_Flintstone?oldid=71954"
Community content is available under CC-BY-SA unless otherwise noted.