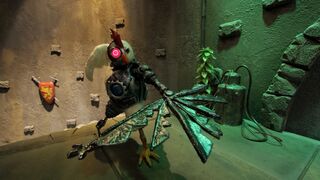 Episode Summary: The creators imagine what the movie Sex and the City 3 will be like if made more guy friendly, Yogi Bear battles with the Power Rangers from Jellystone Park, find out why no one cares about Woody Woodpecker anymore and see the nail biting, hair raising, super big finish of Season Five in Robot Chicken's 100th episode season finale!