Dread Baron ( Name Parody of Red Baron, character a legally safe version of Dick Dastardly ) is a character from Laff-A-Munich, based on the classic Hanna-Barbera cartoon Laff-A-Lympics and the feature film Munich. In this sketch, he and some of the other members of The Really Rottens decide to kill off the other teams because, despite their cheating they always lose. (This statement is wrong however; The Really Rottens did actually manage to win the Laff-A-Lympics in a few episodes). After they kill Boo-Boo Bear by blowing his head up, they kill all the members of The Yogi Yahooeys. Later on, he is seen in hiding, answering a collect call from Captain Caveman together with Mumbly, and soon afterwards, they are both killed when dynamite (which was placed under the table where the telephone was sitting) goes off. 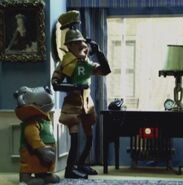 Add a photo to this gallery
Retrieved from "https://robotchicken.fandom.com/wiki/Dread_Baron?oldid=79113"
Community content is available under CC-BY-SA unless otherwise noted.