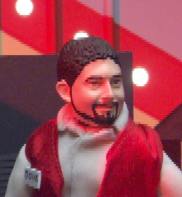 Douglas "Doug" Goldstein (born September 12, 1971) is the co-head writer, co-director, and co-producer of Robot Chicken. Along with his partners Seth Green, Matthew Senreich, and Tom Root, Goldstein skewers pop culture using stop-motion-animated action figures as its stars. Goldstein was also writer and associate producer on Robot Chicken's predecessor Sweet J Presents, a series of 12 animated shorts which ran from 2001-2002 on Sony Entertainment's Screenblast.com. Before starting the show, Douglas Goldstein was a founding member of Wizard Entertainment Group, the leading collectibles and entertainment magazine publisher with over 3 million monthly readers worldwide. Goldstein wore many hats at his 13 years at Wizard Entertainment, including Editor, Senior Editor and VP of Special Projects. He conceptualized, launched and oversaw projects involving every aspect of youth entertainment, including the publications Anime Insider, Toy Wishes, ToyFare, Toons, Sci-Fi Invasion, and numerous custom publishing works on Hollywood films and entertainment properties. Goldstein has been an editor and writer of the popular humor strip "Twisted ToyFare Theater," read by hundreds of thousands of fans from its inception in 1997 to its end in 2011 alongside that of its parent franchise, Toyfare Magazine. It has been compiled into several collected volumes. Goldstein is known in his field as an expert in popular culture and has been quoted in media including TV Guide, "Entertainment Tonight," Maxim, Vanity Fair, TV Tokyo and CBS-AM radio on subjects ranging from Japanese anime to Star Wars collectibles to Beanie Babies. He’d rather forget about the Beanie Babies.

Toyz in the Hood

Slaughterhouse on the Prairie

Rabbits on a Roller Coaster

Retrieved from "https://robotchicken.fandom.com/wiki/Doug_Goldstein?oldid=84544"
Community content is available under CC-BY-SA unless otherwise noted.