Daphne Ann Blake is a character from the Scooby-Doo Franchise

In this parody, Scooby-Doo and his friends enters Camp Crystal Lake. Daphne searches in the bunkhouse with Fred, and after having sex with him, she discovers the remains of Pamela Voorhees (Jason's mother) inside a secret room she ended up in after she sat on a chair in another room. Fred, following her, also falls through and lands on top of her. After calling Fred "gay" (since he is wearing an ascot), Jason breaks into the room. Fred, absolutely terrified, throws Daphne down and runs away. Daphne, unable to defend herself, is subsequently murdered by Jason who kills her by stabbing her three times with his machete.

In this sketch, Velma injuries herself badly after losing her glasses and falling from a great height. While she recovers, Lisbeth Salander takes her place after answering an ad posted on Craigslist by Shaggy and Scooby. During an investigation of a supposedly haunted amusement park, the group is frightened by a ghost and splits up. Daphne, hiding in a closet with Lisbeth, begins to argue with her about her relationship with Fred, but then kisses Lisbeth. Fred, hiding in an adjacent closet, begins to pleasure himself as they make out. Daphne is later seen after Lisbeth hits the " ghost " and the group exposes him.

Daphne was voiced by Sarah Michelle Gellar in both of the sketches she appears in. Sarah Michelle Gellar also portrayed Daphne in the two live action movies with Scooby-Doo. Seth Green, creator of the show, appeared in the sequel, Monsters Unleashed. Tabitha St. Germain voiced her in the game.

Daphne in "A Scooby Friday". You can also see Shaggy in the window on the car next to her.

Daphne falling through the trap door in the bunkhouse

Daphne in the secret room 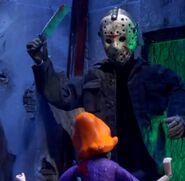 Daphne's death at the hands of Jason 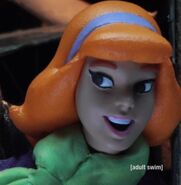 Daphne as she appears in "Mystery Not Incorperated". 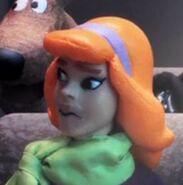 Daphne with a obvious fake mouth.

Daphne in "Abandoned Places".
Add a photo to this gallery
Retrieved from "https://robotchicken.fandom.com/wiki/Daphne?oldid=76274"
Community content is available under CC-BY-SA unless otherwise noted.