Segment Summary: They should have sought help sooner.

Calvin receiving Hobbes as a gift

Calvin and Hobbes talking in the back yard 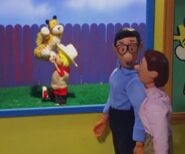 "I think something's wrong with our son." 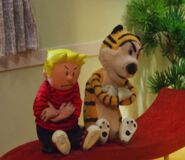 Calvin and Hobbes at the therapist

Calvin after his shock therapy.

A Bloody living room after the deaths of Calvin's parents.

Calvin and Hobbes inside their "rocket"

The Duo on Mars

"Mars is amazing, maaaars is amazing!"
Add a photo to this gallery
Retrieved from "https://robotchicken.fandom.com/wiki/Calvin%27s_Therapy_Adventures?oldid=83230"
Community content is available under CC-BY-SA unless otherwise noted.