Bernard "Barney" Rubble is a fictional character who appears in the television animated series The Flintstones. He is the diminutive, blonde-haired caveman husband of Betty Rubble and adoptive father of Bamm-Bamm Rubble. His best friends are his next door neighbors, Fred and Wilma Flintstone. He first appeared in "Cereal Killer".

In this segment, Barney distracts his friend Fred Flintstone by sending him a letter written on a paper (which he invented himself), in order to steal his fruity pebbles. However, the brawl between the two friends goes a little too far, when Barney accidentally kills Fred by hitting him in the head hard with a club, after Fred started punching him violently. After burying Fred's corpse, he kills off all the tools and equipment (including Dino) who witnessed the accidental murder. After a while, Wilma and Betty return home, only to find all the animals murdered in big puddles of blood, before finding Barney showering in a bird inside a pig's mouth. Barney was later seen on the gallows, where he was hanged. He was voiced by Stephen Stanton.

In this sketch, he assisted Fred in killing Great Gazoo. He was once again voiced by Stephen Stanton.

In this skit, Barney is seen with Fred, who ended up in ICU after getting some kind of lung disease due to smoking. Thanks to this disease, Fred now uses an electronic voice to speak. Instead of feeling pity, Barney finds Fred's robot voice hilarious, prompting Fred to call him an asshole with his robotic voice. Barney then proceeds to light a cigarette inside the hospital, which causes Fred's pure oxygen to explode and destroy the hospital.

This time, Barney was voiced by Dave Coulier who ironically voiced Fred in the skit "Fred Flintstone's Brake Pads". 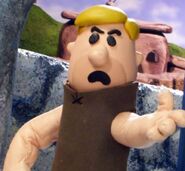 Barney with Fred on the couch

Barney getting punched by Fred

Barney after the accidental murder.

"Dammit Fred, I just wanted some of your fucking cereal". 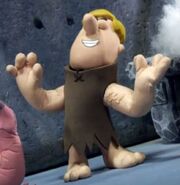 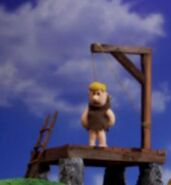 Barney getting hanged for his crimes 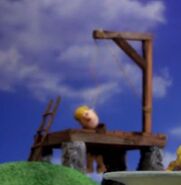 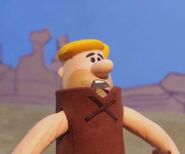 Barney in "The Great Gazoo".

Barney shortly before his and Fred's deaths.
Add a photo to this gallery
Retrieved from "https://robotchicken.fandom.com/wiki/Barney_Rubble?oldid=83117"
Community content is available under CC-BY-SA unless otherwise noted.