Astro is a canine character on the Hanna-Barbera cartoon The Jetsons. He first appeared in Unsolved Case Files: I, Rosie.

In this segment, Astro is seen alongside Elroy Jetson after George Jetson was murdered. After Elroy tells the audience that he has a new dad, the camera pans over to Jane Jetson sitting on Mr. Spacely's lap. Astro rushes over and tells Spacely to "keep his hands off her", but Spacely ignores him and threats him with neutering. This causes Astro to whimp in fear and crawl back to his food bowl where he pees all over the floor.

He was voiced by Mike Henry, who also voiced Mr. Spacely in the same segment.

In this segment, Elroy finds a alien egg which hatches a facehugger. It humps Astro in the ass, which makes him warn George. However, his attempts to warn them results in the creature getting the name "Ranger" after Astro mispronunced "Danger" as "Ranger". The next day, Elroy dies when a chestburster bursts out from his body. After the creature is fully grown, a big fight goes on, killing George and Judy Jetson. The creature is however killed when Rosie shoots it with her guns, causing it to bleed acid which burns away the floor, sending the alien to it's death. However, a new chestburster emerges from Astro's ass (most likely because the facehugger humped his ass earlier) causing Rosie and Jane to shoot him (and the chestburster as well) to death.

This time he was voiced by Seth Green. 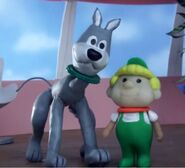 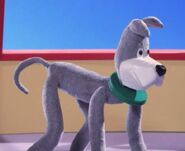 Astro in his second appearence on Robot Chicken 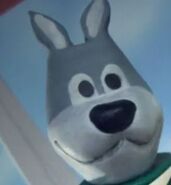 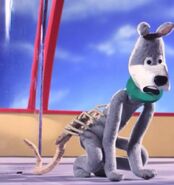 Ranger humping Astro in the ass 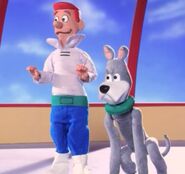 Astro's death
Add a photo to this gallery
Retrieved from "https://robotchicken.fandom.com/wiki/Astro?oldid=72618"
Community content is available under CC-BY-SA unless otherwise noted.