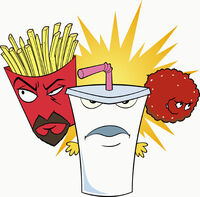 Aqua Teen Hunger Force (also known as ATHF or simply Aqua Teen) is an American animated television series shown on Cartoon Network as part of its Adult Swim late-night programming block, which is a spin-off of Adult Swim's popular show Space Ghost Coast To Coast. It premiered on December 30, 2000. ATHF is one of the four original Williams Street series that premiered on Adult Swim in 2000 (the others are Sealab 2021, The Brak Show, and Harvey Birdman, Attorney at Law), and the longest running original series on the network alongside Harvey Birdman (ATHF is the only one of those four to still be running. HB:AAL aired its last episode in 2007, but is still on in reruns). In 2007, the ATHF movie, Aqua Teen Hunger Force Colon Movie Film for Theaters, was released. The series ended in 2015, with the mock-final episode "The Last One Forever and Ever (For Real This Time) (We Fucking Mean It), and the real final episode "The Greatest Story Ever Told". However, a second movie, Aqua Teen Hunger Force Death Fighter, was planned to be released, but was scrapped.

Retrieved from "https://robotchicken.fandom.com/wiki/Aqua_Teen_Hunger_Force?oldid=85363"
Community content is available under CC-BY-SA unless otherwise noted.